A Brief History of VoIP 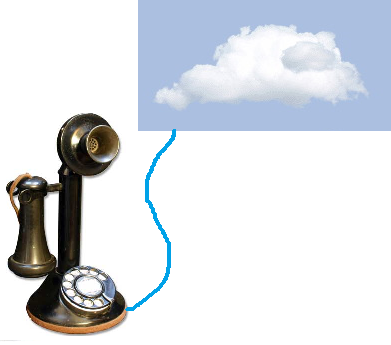 A Brief History Of VoIP

Back in the day (at least when i started out in IT) company phone systems were a huge great big box or collection of boxes hanging on the wall.

Hugely unreliable, each phone on each the desk was connected directly to a circuit board in the phone system.  Your telecoms engineer was a regular visitor to your office to replace components!  Before the internet came along these phone systems used all sorts of different types of connections to connect to the BT PSTN (Public switched telephone network) such as ISDN.  These lines were also hughly expensive.

Over time as components shrunk, these systems got smaller and more reliable, but still used BT’s ISDN connectivity.

Then along came the Internet, a type of cable called ethernet and a network protocol called TCP/IP (Transmission Control Protocol over IP).

Before these 3 there were loads of competing standards.  It’s hard now to think of a world where everything doesn’t just use these three!

At first the internet was too slow to carry anything other than txt.  It was a bit like Teletext or Ceefax (Remember those??).  The idea of using it for voice was a pipe dream!  As the technology evolved, we now think nothing of streaming voice and even HD video.

Initially Phone system manufacturers started using Ethernet cables to carry their voice data.   This saved a bit of cash as you only had to lay one type of cable in a building, but you still needed to use double everything up so phones used some and computers used others. This wasn’t true VoIP as the network protocols were not TCP/IP, so although the cables looked the same, the data was different and so the cable could be shared.

The next step was to drop all of the different proprietary network standards and adopt IP giving birth to Voice or IP, aka VoIP!

Unfortunately for the old phone manufacturers this mean that computers could understand VoIP natively and it wasn’t before long that every man and his dog was building a Voip server using some form of linux.  However most with a call quality and reliability that would make even the first PSTN phones systems look impressive.

The final piece of the puzzle is the Cloud!  I’ve said it before, but the cloud is really just a fancy marketing term for “outsourced” or “off-premise”.  It’s far easier to sell the idea of “moving your IT to the Cloud” rather than “outsource your IT!”

In short the cloud is any system accessed through the internet.  If you access the servers in your office, those servers are your “private cloud”.

Which brings us to current day.  At the moment there are two types of VoIP platform, the first is on premise, where you host the server yourself, and the second is hosted, where someone else hosts the server for you.

Some hosted solutions are better than others.  One might be a server sitting in the corner of your IT suppliers office, another might be a clustered server farm sitting in a data center replicated to multiple geographic locations.  On paper it’s hard to compare but there are huge advantages of the latter.

Having researched the market and having been approached by nearly every VoIP phone system manufacturer out there, Jolly IT chose to resell a system based on the Broadsoft platform.

This platform is so solid and reliable it’s the same one most of the big providers use.  It’s so good even BT chose to use it as their preferred hosting platform.

In fact the one we resell is BT’s one!

If you would like more information or pricing just call us on 08003317668 and ask to speak to Tom Jolly.

This site uses Akismet to reduce spam. Learn how your comment data is processed.