So why is Microsoft Windows 10 essentially Free? 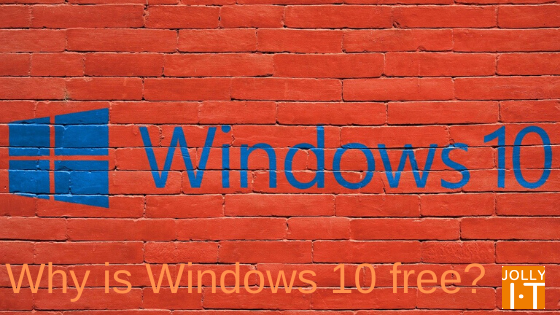 As we say goodbye to support for Windows 7 in a few days, we asked ourselves why is it that Windows 10 is essentially free. We used to pay £100’s to own and run earlier versions of the operating software. So just how is Microsoft making their money now?

Yes, you can download and install Windows 10 onto your PC. Until you license it and make it fully operational, you’ll find a watermark and disabled options for changing the wallpaper and colours. However, to all intents and purposes, it’s a fully working OS. Buying a new PC or laptop will usually come with Win10 pro or home versions. Lots of users are still reporting that they could still upgrade their licenced Windows 7 and 8 pcs for free. So, it is still worth trying. Remember though, the license is only for the lifetime of the first PC it is installed on. A new license will come with your new PC.

One way that Microsoft can rake in a bit of money is the usual format of running ads, those of you who play the games will find ads running, you can pay a premium to stop these. Xbox and Xbox live users pay subscriptions for some of the best games on the market. Playing online is big business and Microsoft is right there at the epicentre. There are some ads that appear in your taskbar, action centre and even lock screen, here is a tutorial in disabling them.

Using the search bar in Cortana will force you to use Bing. Microsoft’s own search engine. Bing can generate income in a very similar way to Google.

The place to get all your apps now is in the store, there are lots of free apps. However, many are premium apps with an upfront cost or a subscription. Movie rentals and books and music are also a few £s. Collaborations with hardware manufacturers such as Harmon means you can purchase headphones right from the store along with one of the latest games.

Microsoft does hope you will stay within the Windows environment. So, when it comes to choosing a new tablet, you would consider a Surface rather than an iPad. Then you would be able to flow from one device to the other more seamlessly.

Obviously, Office 365 with its subscription model works to keep you paying into Microsoft’s coffers each year. OneDrive, for example, can have the storage capacity expanded with a subscription.

There are many more ways that Microsoft can generate its income. So, although it may at first seem like they are just giving you your OS for free, they are not losing out.

This site uses Akismet to reduce spam. Learn how your comment data is processed.